Skimping on food isn’t the only rookie error our experts often see. 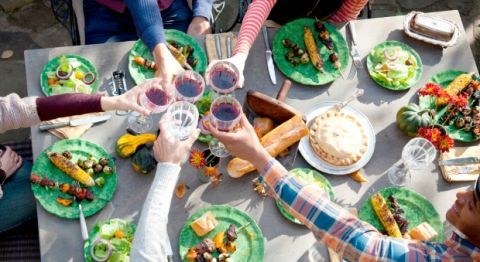 1. Considering neighbors “out of sight, out of mind.”
Invite the Smiths one door down. Even if they don’t show up, it’s friendly gesture —and might keep trouble at bay.

“Inviting your neighbors is the nice way of warning them without actually warning them,” says Helah Kehati, founder and president of the event planning company JPO Concepts. “Leave them your cell phone number, too. It’s courteous to offer a direct way of getting in touch with you if they’re bothered by any noise — and might discourage them from calling the police instead.”

2. Hosting a game of musical chairs.
Don’t assume that people are fine with standing. “If your party is longer than two hours, you should have seating for at least 80% of the guests,” says Kehati. Move indoor seating outside when you can, and borrow folding chairs from friends.

3. Leaving extension cords where guests might trip.
Place cords around high-traffic areas, or get metal-shaped U’s at a hardware store to clamp down cords into the grass, says Kehati. Don’t use any extension cords outside that aren’t UL-certified and marked “suitable for use with outdoor appliances,” says Rachel Rothman, Technical Director of the Good Housekeeping Research Institute.

5. Serving food guests must sit down to eat.
“Make sure food is fork-only,” says Kehati. You don’t want guests to struggle with more than one utensil when they’re standing and mingling. So for example, if you’re serving pasta salad, do tortellini, not linguini.

6. Not timing your grilling right.
Preheat the grill at least 10 to 15 minutes before you’re ready to cook. Not sooner —otherwise you’ll waste gas, says Sharon Franke, Director of the Good Housekeeping Research Institute Kitchen Appliances and Technology Department. Start grilling hamburgers, hot dogs, and steaks about a half hour before you plan to serve them. “If you cook too soon, and keep items warm, they’re going to get too dry,” Franke says.

7. Going overboard on the booze.
People are more susceptible to alcohol when it’s hot outside, so serve lighter drinks, like sangrias, and make sure your proportions don’t tip too far in liquor’s favor, says Franke.

8. Leaving out food for too long.
You shouldn’t leave perishable food outside of the fridge for more than two hours —and cut that to one hour if it’s over 90° F outside, says Franke. Bring food out in smaller batches and replenish when necessary instead of serving everything you made all at once.

9. Forgetting a game plan for the trash.
Make sure you have at least one large garbage bag for every 10 people, says Kehati. Line trash bins with more than one bag so you can remove and replace full bags in one step.