The Rise of the Minimony and the Micro-Wedding 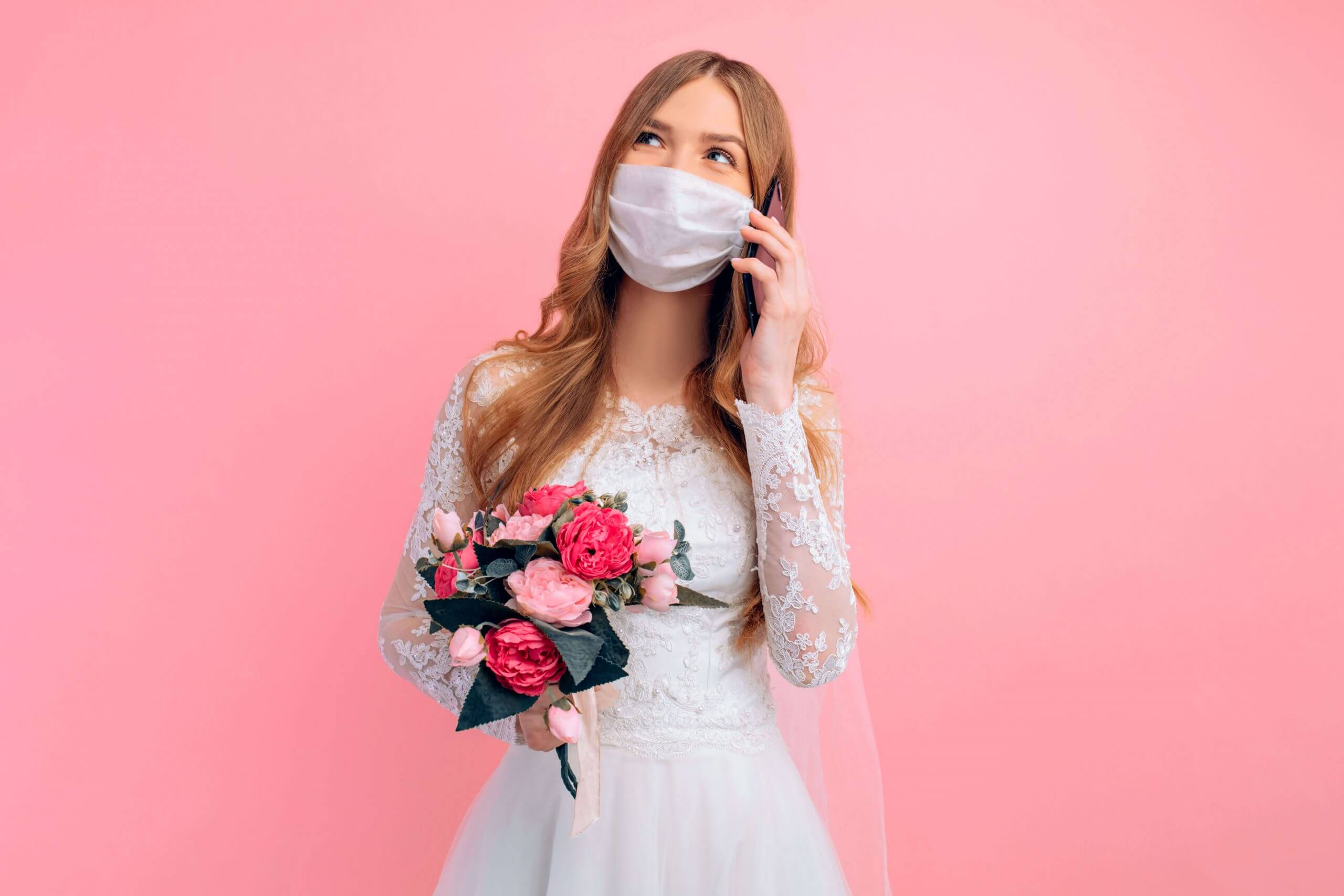 The Rise of the Minimony and the Postpone Micro-Wedding

Planning a postpone wedding is a faff at the best of times; during a pandemic, it resembles purgatory. You’ve booked the venue, the flowers, the dance floor, and the d.j., only to be told that the venue will not open this year, the florist is out of business, and dancing is illegal. You rebook at a smaller venue—someone’s back yard, maybe—pick your own flowers (“Farmhouse chic!”), and install, at key entry points, hand-sanitizing stations with tasteful signs (“Spread love, not germs”), only to learn that a quarantine has been imposed on out-of-state visitors. Your parents and siblings will no longer be able to attend. They are upset; you will need to postpone. And so it goes.

For a year and a half, my partner and I had been planning a wedding in Crete, where he grew up. We were already legally married—town-hall ceremony—but we wanted the big shebang: the long train, the complicated seating plan, loved ones from all over the world spilling wine as they danced the sirtaki. We chose a date in June and then watched anxiously as the virus spread through January, and then February. Some time into my own pandemic-wedding purgatory, I began having dreams about my dress fitting in strange and otherworldly ways. The sleeves would inexplicably droop to the floor at the elbows, cartoon-like, or extend past my hands and behind me, like white lines on a highway. One day, in late March, after a relentlessly upbeat weekend at home—quarantinis! CrossFit by Zoom!—I sat down to postpone our wedding. I knew how to write the e-mail because I had already received several, from friends in the same boat. They were always warm, and gracious, and not too self-pitying; “What’s a wedding in all this?” they seemed to say. After I sent the note, I received a flurry of messages of relief and consolation. One friend, who had moved her own wedding twice, wrote simply, “Coronavirus is an asshole.”

All through the spring and summer—which is to say, all through wedding season—the virus wreaked havoc on the wedding industry. “It was bedlam,” Laura Krueger, of Kleinfeld Hotel Blocks, which helps couples book accommodations for their guests, told me. “There were no protocols in place.” On March 13th, the wedding-planning Web sites the Knot and WeddingWire set up an emergency hotline for panicked brides and grooms. “We had hundreds of calls per day for two months following that,” Jeffra Trumpower, at WeddingWire, told me recently. As lockdowns and travel restrictions came into force around the country, “couples started to call and say, ‘What do I do? I’m supposed to get married next weekend.’”

At first, people postponed, thinking the pandemic couldn’t last longer than a few weeks. Then they postponed again. “There were stages where it didn’t seem like people fully understood the scope or magnitude,” Andrea Freeman, an event planner in New York, told me. Slowly, two options, both of them buzzkills, emerged: you could postpone indefinitely or hold the wedding right away, with the appropriate safety guidelines in place (festive!). “The conversations I was having with my clients were very much about, ‘What is the focus, really? Why are you really having a wedding?’ ” If the goal was to throw a big party, that wasn’t going to happen. (Although, last month, New York City’s sheriff tweeted about breaking up an indoor wedding of nearly three hundred, in Queens.) “But if the focus was really to be married, to share that with the most important people in their lives—if they were saying stuff like that to me, then we started a conversation about, O.K., here’s what that could look like in this time.”

The wedding industry, floundering through waves of postponements, has developed a suite of options—and a vocabulary—for couples wanting to still splash out on their nuptials, global crisis notwithstanding. There’s now the “micro-wedding,” a small ceremony with fifty guests or fewer. You are encouraged to follow this up with a “sequel wedding,” a larger reception, at a later date. But when even fifty guests seems optimistic (or, depending on your location, illegal), there’s a smaller option, touted enthusiastically by the industry, available: the “minimony.” A minimony might have ten guests: parents, siblings, an officiant standing at a distance. It has all the components of a normal wedding—ceremony, reception, three-tiered cake—shrunk to pandemic proportions.

This is a significant shift. In a survey conducted by Zola, the wedding-planning and registry company, of more than two thousand engaged couples planning their wedding during the pandemic, half were planning a minimony. “Smaller guest lists are definitely a trend we see into the future for some time,” Emily Forrest, Zola’s director of communications, told me. In another survey, by the Knot and WeddingWire, of six hundred and eighty-four couples in the U.S. with weddings between September and January, fifty-eight per cent planned to keep their original date, with many opting for a pared-down guest list, and just seven per cent were pulling the plug altogether. “People are not cancelling,” Trumpower said.

All that rejiggering can take a toll on the bride- and groom-to-be, Freeman, the planner, told me: “People are starting to get fatigued, and they’re going through different phases of excitement and enthusiasm, and then resignation and upset.” I recognized the symptoms. She offers her clients guided meditations and advises them to stay present. “At a certain point in time, you can’t talk about the flowers and the music anymore, or the flavor of the cake,” she said. “It’s about so much more than that. How we get through this is how we handle anything in life.”

Six months after we sent our first wedding postponement e-mail, we had another decision to make. Pandemic-wise, nothing had changed. There was still no vaccine, and cases were rising. Should we postpone again? Cancel altogether? Slash our guest list? I scrolled past images of a socially distanced wedding in which the couple had used giant Teddy bears to separate guests. Where did they get the bears? I wondered. At a certain point, I came across a podcast called “Corona Brides,” in which the host, Jordie Shepherd, a coronavirus bride herself, interviews women (and sometimes couples) navigating the wedding-planning process during the pandemic.

Shepherd launched “Corona Brides” in April, around the same time she decided to postpone her own wedding, which was supposed to take place in May. “The Las Vegas desert was my dream,” she told me. She eventually married closer to her home, in San Antonio, Texas, outdoors, under sprawling oak trees, with an indoor reception in an industrial-chic space filled to half capacity. (“People were able to go inside and sit with their quarantine family,” she said.) But she still has the occasional pang; she told her husband, “Next time we go to Vegas, I’m taking my wedding dress and getting a photo in the desert!” Since starting the podcast, she has interviewed two dozen pandemic brides. Some have postpone their weddings three times; others have married in their back yard or at their original venue, meant for ten times as many guests. Several brides held the ceremony in their kitchen. “It is a roller coaster of emotions,” she said. “You’re almost mourning the loss of a wedding you don’t know if you can have or not.”

Shepherd connected me with Kelli and Omar Brown, who got engaged in November and planned to tie the knot quickly. “I was, like, Six-month engagement, let’s do this!” Kelli, a bridal-hair stylist, told me. They booked a whitewashed photography studio and invited around a hundred guests. But, in late March, Detroit went into lockdown and Omar’s bachelor party in Las Vegas was cancelled. Kelli threw him one at home, with a makeshift bar and slot machines purchased on Amazon. A few weeks later, Kelli’s bachelorette party was cancelled, and Omar surprised her with mimosas and a D.I.Y. nail bar. At that point, Kelli thought, We only have two months left. Still, they decided not to postpone. “We were, like, even if we have to get married in hazmat suits at the courthouse, we’ll get married on that day.”

Kelli had three contingency plans, depending on the state of the pandemic. Wedding A, she told me, “was, like, best-case scenario, a hundred people.” Wedding B would be small and socially distanced, with just family and a few friends. “Plan C was literally my husband and I going to the courthouse.” In the end, Wedding B postpone. They cut their guest list to fewer than twenty and seated households on vintage furniture nine feet apart (“Very cozy, and also very safe”). Omar’s brother, a pastor, drove in from Philadelphia to marry them, and they streamed the ceremony on Zoom. Afterward, they held a drive-through reception. They handed out individually wrapped cupcakes; friends decorated their cars and shot confetti out their windows. One guest texted them to ask, “What car should I wear?” “It was wonderful,” Kelli said.

That evening, they drove to Grand Rapids for a wedding-night getaway. They arrived late, to find a police barricade blocking the road. George Floyd had been killed just five days earlier; a protest had gathered and was being dispersed by officers in protective gear. Then the car filled with a cloud of eye-watering smoke. “My husband was, like, ‘Oh, that’s tear gas,’ ” Kelli recalled. She covered her face with the train of her dress. Omar, who is Black, briefly went outside, and Kelli, who is white, worried for his safety. Eventually, they were allowed to pass and returned home to their family.

Melissa Brown, who founded Sweet Petite Celebrations, which caters to small weddings, in May, told me minimonies can feel more intimate than larger weddings. “You can really dig in deep to each guest that’s coming and make them personally feel special,” she said. They don’t necessarily postpone come cheaper than larger weddings, though; Brown told me her minimony clients spend, on average, between ten thousand and thirty thousand dollars. One couple sent their loved ones a survey asking them to name their favorite dessert and then served each selection in individual portions. “Very Marie Antoinette,” Brown said. “Very let them eat cake.” Food takes center stage out of necessity, she added. “You’re sitting at a table having a beautiful, upscale dinner party,” she said. “You can’t get up, you can’t mingle, you can’t dance.”